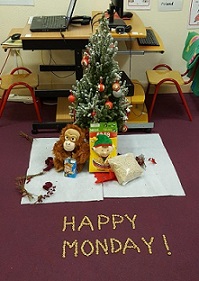 First and Second Class have been waiting and waiting in the hope that Santa would send an elf to ‘hang out’ with them again this year….and he did!! On Friday last, they received a parcel and a letter in the post, all the way from The North Pole, explaining that they could keep the elf until next Friday, as then the elf has to return to The North Pole to help Santa and Mrs Claus pack the sleigh for their worldwide trip. The children put the name to a vote and came up with the very festive name of Holly Pudding!

There was great excitement this morning when they saw the mischief Holly Pudding got up to over the weekend!