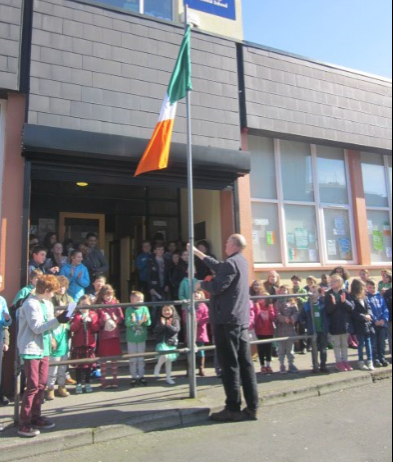 Today was a very memorable day for everybody in St. Nicholas’.

We started the celebration by gathering in the Hall, together with parents and neighbours of our school in Waterside, and welcomed the arrival of the Honorary French Consulate to Ireland, Madame Catherine Gagneux. She spoke to us about Ireland and France and the many deep historical and cultural links that are shared between both countries. We sang three songs for her, one in French, Irish and English! Third and Fourth Class performed a medley of Irish songs and tunes on the tin whistle.

Following this, we had a reading of the 1916 Proclamation and our school’s Proclamation for a New Generation as written and read to the audience by Sixth Class. We then proceeded outside where the Irish flag was raised by Rev. Gary Hastings, followed by the singing of Amhrán na bhFiann.

This very special day will be held in the memory of all for years to come.