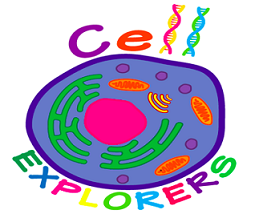 Today a group of scientists from the Science department in NUIG came to visit us. They were part of the Cell Explorers project and they have developed a fun new roadshow called Little Cells. During their visit, they were teaching us about the smallest unit of life – the cell – in a fun and interactive way.

They came into our classroom for an hour and they split us into four groups. First of all, Katie, the team leader, talked to us about the working of the human body, the heart, the lungs and even our nerve endings! She told us lots and lots of interesting and amazing facts!

In the first activity we worked together to solve a puzzle called The Body Game. This is where we had to match clues about the human body to organs. Then we had to try to put pictures of everyday objects in order of size, starting with a cell, a grain of rice, a kiwi, a football, a chair and an elephant! This game made us realise just how small a cell is when compared to everyday objects.
Then we played a game called Playing Cells. In this game we got a chance to act out the way in which cells must work together to perform the important functions of the organs to which they belong. This was such fun. We had to do a Mexican wave, make a bridge and then press on a buzzer!!
And finally, to end the fun, we got to make our own cells from Jumping Clay. We had a great afternoon with the team and learned lots of interesting facts at the same time!